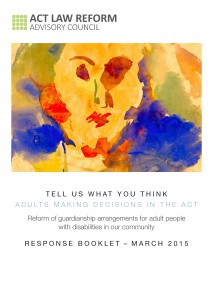 Thank you for the opportunity to comment on this review. We note that the Terms of Reference include discussion of the ACT Human Rights Act 2004 and the United Nations Convention on the Rights of Persons with Disabilities (CRPD), but explicitly exclude guardianship-like arrangements for children from this Review.

The Commission welcomes this Review, which comes at a critical time for the rights of people with a disability. There has been significant debate about the future of guardianship laws in light of the CRPD, which is particularly relevant in a human rights jurisdiction such as the ACT. Some commentators see the UN General Comments as ‘wanting in key respects’.[1] It is also relevant that this Review comes at a time when the ACT Government is transitioning to the new model of service delivery under the National Disability Insurance Scheme (NDIS).  As Gerard Quinn, Professor of Law at NUI Galway, recently commented:

‘The issue of legal capacity reform is probably the most important issue facing the international legal community at the moment. It potentially affects everyone in their own lives – and everyone has a stake in the debate. This is because the issues at stake actually transcend disability and cut to the heart of what we mean to be human.’[2]

This Review represents both an opportunity and a challenge to the ACT Government and broader community. An opportunity to fully realise our status as a human rights jurisdiction by implementing at a local level some of the most significant changes to the lives and independence for people with a disability contemplated by western democracies; and a challenge not to over-reach or under-invest in such reform, and risk further limiting the human rights of people with disabilities.

A key issue raised in our response to the ACT Government’s recent review of mental health legislation was that the law is only one component of an effective and human-rights compliant system. As Gooding has noted, while the law has the ability to create the ‘power structures, institutions and incentives of disability services “systems”’, appropriate resources are critical to ensure ‘any benefits of using the law for social justice in this way are overwhelmed by other powerful forces in society, such as reasonable allocation or wealth disparity’.[3]

In our view, any reform to guardianship law needs to be coupled with significant resources focused on education and guidance material, and the allocation of funding to critical services to support people with a disability in their decision making. This is timely and all the more important given the significant reforms to the Government and non-government sectors introduced by the NDIS, and proposed changes to the structure of statutory office holders in the ACT which have the potential to decrease visibility of oversight in relation to guardianship issues.[4]