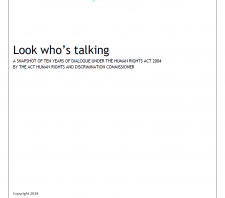 The ACT’s pioneering Human Rights Act 2004 is ten years old. As a non-entrenched law, based on a dialogue model of human rights protection, the HR Act is unique in that it has not remained a static document but has been incrementally improved over the years. The Act has been subject to three mandated reviews in the course of the last decade, the most recent of which was tabled in the ACT Legislative Assembly on 25 November 2014.

The first two reviews offered an opportunity to reflect on whether the HR Act had been living up to its overarching goal of ‘bringing rights home’ to Canberrans, and the chance to improve its provisions and related processes in light of identified shortcomings. Following the 12-month review, which was completed in 2006, the HR Act was amended to, among other things, introduce a duty on public authorities to comply with human rights, and an independent right of action in the Supreme Court for breaches of this duty. The review on economic, social and cultural rights in 2010 resulted in the introduction of a right to education, the first express recognition of a socio-economic right in the HR Act, albeit in limited form.

The Government’s third and current Review Report, which is available on the website of the ACT Justice and Community Safety Directorate (JACSD), sets out its views in relation to various matters relating to the operation of the HR Act and whether it should be extended to include additional economic, social and cultural rights. The Government has said that it proposes to extend public authority obligations to the right to education, and to progress express recognition of indigenous cultural rights. Both are welcome, but modest changes. Disappointingly, however, the Report, overall, recommends retaining the status quo, with little consideration or engagement with the evidence to date.

Coinciding with the 10-year milestone of the HR Act, the third and current review presents an important opportunity to begin a conversation about the roadmap for the next decade. The Government has said that it intends to undertake a more extensive process of public consultation on its proposals next year. As a first step towards contributing to that process, the Human Rights Commissioner has prepared this paper with the aim of identifying some of the strengths and weakness of the human rights dialogue to date, and the ways in which that dialogue may be deepened, strengthened and broadened over the next 10 years. The HR Act’s credentials as ground-breaking legislation is beyond question, however, now is not the time to become complacent about its achievements.