Why do I need to know about the Human Rights Act?

Some example of organisations that are public authorities and who would therefore have duties under the HR Act: 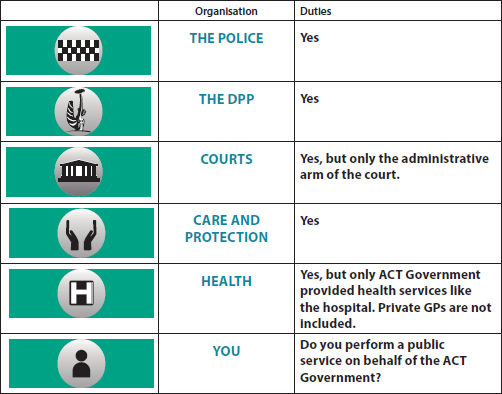 What are Human Rights?

Human rights are inherent to all of us as human beings, regardless of who we are, where we live or any other characteristic. They are intended to provide an interrelated safety net of protections that ensure we are able to reach our potential and be treated fairly by our Government. The human rights protected in the ACT Human Rights Act are drawn from internationally agreed documents about what rights must be protected by Governments.

Human Rights in the ACT
The human rights protected in the ACT HR Act are:

Are human rights absolute?
The majority of protected human rights are able to be subject to reasonable and proportionate limitation.

Exceptions in international treaties are generally the right to freedom from torture, slavery and servitude, and the right to recognition before the law.

The human rights of victims of crime may, at times, conflict with those of defendants or other people in a legal context. When this occurs, a human rights analysis should be undertaken to consider whether reasonable limits can be placed on the human rights of either party. This analysis must be adequately documented in order to demonstrate that it has occurred.

Deciding whether a limit is reasonable and proportionate requires a consideration of:

If the action or decision is not reasonable and proportionate, it may be unlawful, unless the Public Authority can rely on the defence of having no discretion in law to act in a different way.

Defence
Section 40B(2)(a) of the HR Act, provides a defence where a public authority could not have acted differently, or made a different decision because it was required under another Territory or Federal law to act that (non-human rights compliant) way. (s. 40B(2)(a) below)

Interpretation of laws and human rights
Section 30 of the Human Rights Act 2004 says that:

so far as it is possible to do so consistently with its purpose, a Territory law must be interpreted in a way that is compatible with human rights

So a Court or Tribunal should adopt a “human rights consistent” interpretation within the “purpose” of the statute.

The ACT Supreme Court held, In the Matter of an Application for Bail by Isa Islam [[2010] ACTSC 147 (19 November 2010)], that the ordinary processes of statutory interpretation, including that under section 30 of the HR Act, should be applied when interpreting Territory legislation, with the aim of finding a provision that is both human rights-compatible and consistent with purpose.