The Act places obligations on three types of ‘Public Authorities:

These authorities are bound by the duty to comply with human rights in all their activities.  The Legislative Assembly and ACT courts are specifically excluded from the definition of ‘public authority’, except when acting in an administrative capacity. These are generally ACT Government bodies, such as:

·        Territory instrumentalities — Including public sector corporate bodies and agencies that are subject to Ministerial control.

·        Ministers— The Chief Minister and the four Ministers who form the Executive.

·        Police officers when they are exercising powers under ACT law  — Members of the Australian Federal Police when acting in their capacity as ACT Policing, which is the community policing arm of the AFP operating under ACT legislation.

These are private bodies or community organisations with some public functions.  ‘Functional’ public authorities will be bound by the duty only when they are exercising functions of a public nature, such as when these functions have been outsourced to them under contract. Whether an organisation is such a Public Authority will depend on factors such as whether the functions are identified with functions of government, whether they are regulatory in nature and whether the entity is funded by Government to perform the function.  See our Factsheet on Public Authorities for more information

An example of a ‘functional’ public authority could include a non-government social housing provider, who is funded by government to essentially provide public housing.

Section 40D of the HRA provides that private bodies performing private functions that would not otherwise be bound by the HRA can ‘opt in’ to the obligation to comply with human rights.

‘Act’ means positive conduct, a failure to act or a proposal to act. If an action is found by the courts to be incompatible with a human right, it will be unlawful.

Nearly all the human rights protected are able to be subject to reasonable and proportionate limitation by Public Authorities. The only exceptions are generally the right to life (s.9) and freedom from torture (s.10). The Human Rights Act allows reasonable limits on rights, set by Territory law, provided they are demonstrably justified in a free and democratic society. This requires a consideration of:

2.      the importance of the purpose of the limitation;

3.      the nature and extent of the limitation

4.      the relationship between the limitation and its purpose;

5.      any less restrictive means reasonably available to achieve the purpose the limitation seeks to achieve.’

The Commission suggests this means asking a Public Authority:

Or to put it simply, a Public Authority should not use a ‘sledgehammer to crack a nut’. If the action or decision is not reasonable and proportionate, it may be unlawful, unless the Public Authority can rely on the defence of having no discretion in law to act in a different way.

Section 40B(2)(a) of the HRA, provides a defence where a public authority could not have acted differently, or made a different decision because it was required under another Territory or Federal law to act that (non-human rights compliant) way. 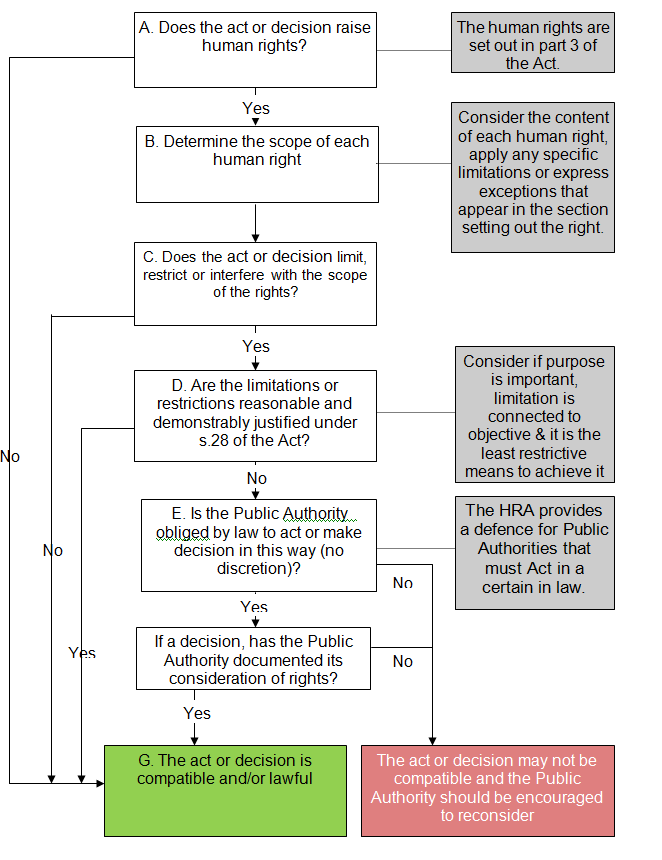 Example: Government proposes to evict a mother and her school-aged children from public housing because the lease is in her mother (the children’s grandmother’s name), and the grandmother has passed away.

Example: A person with a disability is accommodated in a group home from which they cannot leave without permission. The door is locked at all times. There is no relevant court or tribunal order in place for their accommodation. 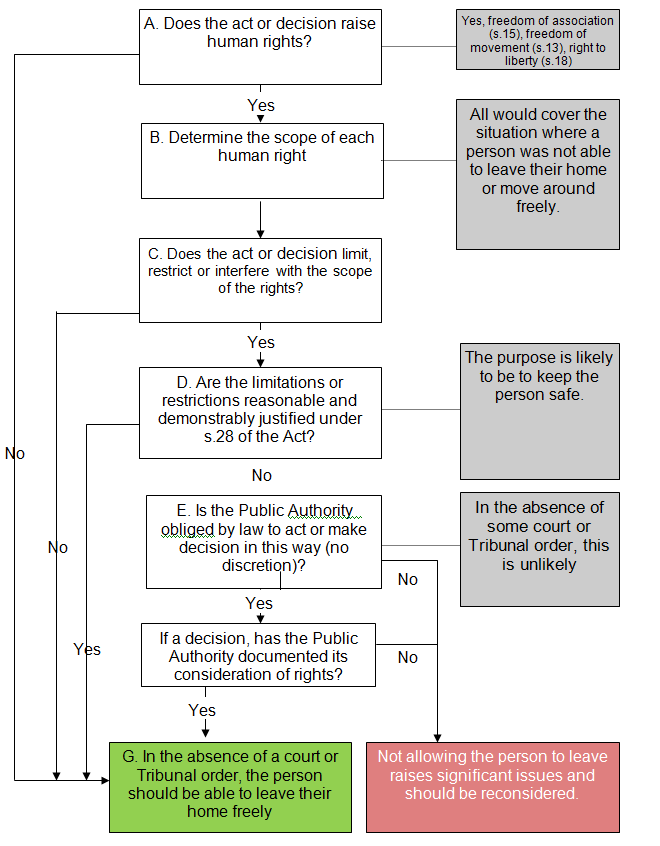