ACT Public Authorities, which are ACT Government Agencies and those doing outsourced Government work, must:

Some example of organisations that are and are not public authorities:

Yes, but only ACT Government provided health services like the hospital. GPs are not included.

No, Food may be essential, but selling it doesn’t count as a public service.

Yes, as part of the Territory and Municipal Services Directorate.

No, all banks in Canberra are privately run and funded organisations.

Yes, ACT Government schools, along with the Education and Training Directorate.

No, media outlets are generally privately run and funded.

Do you perform a public service on behalf of the ACT Government?
If you answered yes then you have duties under the Human Rights Act 2004. You can obtain more information about whether you are a Public Authority, and your obligations, from our Public Authorities Factsheet

What are Human Rights?

Human rights are inherent to all of us as human beings, regardless of who we are, where we live or any other characteristic. They are intended to provide an interrelated safety net of protections that ensure we can reach are able to reach our potential and be treated fairly by our Government. The human rights protected in the ACT Human Rights Act are drawn from internationally agreed documents about what rights must be protected by Governments. 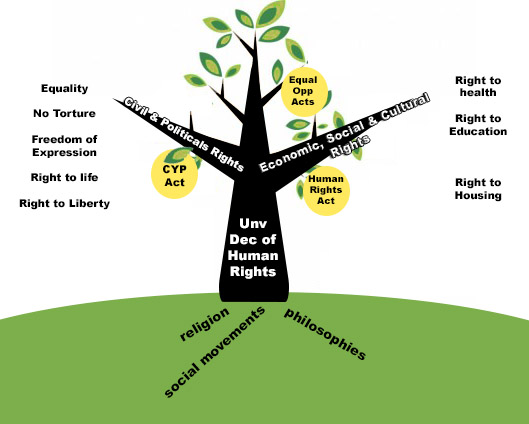 The foundations and roots of human rights are philosophy, religion, history of conflicts, social movements, etc.

The trunk is the establishment of the modern human rights movement, particularly the Universal Declaration of Human Rights in 1948 by the United Nations.

Those initial principles were divided into two main limbs of individual civil and political rights and collective economic, social and cultural rights.

The final step is the fruit of the tree, when local Governments adopt these international obligations into law. The most relevant being the ACT Human Rights Act 2004.
Adapted from the British Institute of Human Rights’ publication ‘A Voluntary and Community Sector Guide to Using Human Rights’