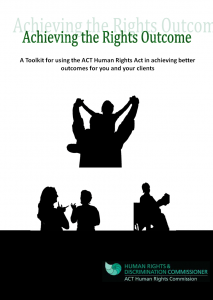 This guide has been developed to assist residents of the ACT advocate for themselves, and others, using the Territory’s unique human rights framework. The ACT was the first jurisdiction in Australia to enshrine through legislation certain basic human rights that all citizens could rely on when engaging with ACT Government agencies.

This guide includes real life case studies where human rights has been used to:

We all enjoy universal, fundamental human rights and freedoms. The ACT was the first Australian jurisdiction to enact legislation covering civil and political rights. In comparison, other Western democracies such as the United Kingdom, Canada, New Zealand, South Africa, most European countries and the United States all have some form of human rights legislation.

These Acts are based on sixty years of international human rights treaty development, beginning in 1948 with the United Nations Universal Declaration of Human Rights, with several Australians playing a pivotal role. Further specific treaties include the International Covenant on Civil and Political Rights and the International Covenant on Economic, Social and Cultural Rights, as well as more recent ones covering vulnerable populations such as women, children, people with disabilities and indigenous peoples. The ACT Human Rights Act benefits from decades of human rights jurisprudence. Already the Human Rights Act has improved the actions and decisions of ACT Government and enhanced protections in ACT laws.