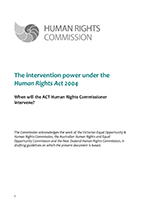 The role of the Human Rights Commissioner

The functions of the Human Rights Commissioner with respect to human rights are to:

Use of the Human Rights Act in courts & tribunals

The Human Rights Act 2004 requires courts, tribunals and decision makers to interpret ACT legislation in a way that is compatible with human rights, as far as it is possible to do so, consistently with the purpose of the legislation.

The Act also imposes direct human rights obligations on public authorities (eg public servants or the Australian Federal Police when exercising powers under ACT legislation). It is unlawful for a public authority to act in a way that is incompatible with a human right; or to fail to give proper consideration to a 2
relevant human right when making a decision. Action for a breach of human rights by a public authority may be brought in the Supreme Court, and these obligations may be raised in other proceedings, for example in proceedings relating to public housing or care and protection of children.

The Act also enables the ACT Supreme Court to issue a ‘declaration of incompatibility’ where it finds that an ACT law is incompatible with human rights. This does not make the law automatically invalid – it is then up to the Legislative Assembly to decide whether to change the law.

(1) The human rights commissioner may intervene in a proceeding before a court that involves the application of this Act with the leave of the court.
(2) The court may give leave subject to conditions.

The Explanatory Memorandum to the Act makes it clear that the purpose of this power is to ensure that there is independent advocacy in relation to the interpretation and application of the Human Rights Act. The Commissioner cannot initiate proceedings herself nor can she represent an individual or organisation in proceedings.

The Human Rights Act broadly defines the word ‘court’ referred to in section 36. This means that in addition to the ACT Supreme Court, ACT Magistrates Court and ACT Children’s Court, the Human Rights Commissioner can seek leave to intervene in proceedings before ACT tribunals including the Administrative Appeals Tribunal, the Discrimination Tribunal, the Guardianship Tribunal and the

Mental Health Tribunal.
The Human Rights Act does not include a provision for costs orders against the Commission where it seeks leave to intervene under section 36. The Act appears to envisage that the Commission not be exposed to costs when performing its statutory responsibility to assist the Courts in interpreting the rights protected in the Act. Ultimately, of course, this remains a matter for determination by the courts.

The Commissioner will only consider seeking leave to intervene in proceedings where:

Factors that the Commission considers relevant to its consideration of whether a matter falls within paragraph 1 of these guidelines are:

As not all of these factors will be relevant to every potential intervention, the Commissioner may give more or less weight to each of these factors depending on the particular circumstances of each proceeding.

There is no requirement that the Commission be notified about proceedings in other courts or tribunals where human rights issues have been or are to be raised. This means that in all proceedings other than those occurring in the Supreme Court, the Commission relies on informal notifications or requests about the proceedings before considering whether or not to intervene.

Information to provide to the Human Rights Commissioner.

The following is a list of information about the proceeding that should, if practicable, be provided to the Commission by the party notifying or seeking the intervention of the Commissioner: