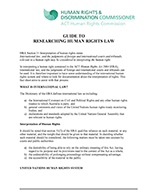 The Dictionary of the HRA defines international law as including:

It should be noted that section 31(2) of the HRA qualifies reliance on such material, or any other material, and the weight that should be given to that material. In deciding whether such material should be considered, the following matters must be taken into account by courts and public authorities:

The machinery used by the United Nations system to govern international human rights can be divided into two streams:

These are organs and sub-organs created under the UN Charter and include the following:

Note that the Human Rights Council replaced the Commission on Human Rights in 2006 (GA Resolution 60/251). It assumed responsibility for special rapporteurs, investigative working groups and other special procedures previously overseen by the Commission.

These are organs that have been created by one of the 8 human rights treaties adopted under UN auspices and which have been set up to monitor state compliance with their obligations under those treaties:

The treaty based organs are likely to have the most useful material for the purpose of interpreting provisions of the HRA. The HRA specifically refers to the ICCPR as its primary source. It is the most relevant treaty for the purpose of interpretation.
Note that the jurisprudence of other human rights jurisdictions will also be persuasive. For example decisions of the European Court of Human Rights, though not directly applicable to Australia, provide a detailed examination of particular rights. UK cases which apply the Human Rights Act 1998 (UK) are similarly persuasive (see http://www.bailii.org/).

The International Covenant on Civil and Political Rights (ICCPR)

The full text of the ICCPR can be found here: http://www.unhchr.ch/html/menu3/b/a_ccpr.htm

Article 28 of the ICCPR created a body named the Human Rights Committee, its function being to monitor State parties’ compliance with the rights contained in the covenant. The Committee’s functions are the following:

Article 40 requires States which are party to the Covenant to submit periodic reports to the Committee on the measures they have adopted to give effect to the rights recognised by the Covenant. Concluding Observations are the Committee’s responses to these reports, and they contain useful comments on human rights. The full text of all Concluding Observations can be found at the UN’s Treaty Body Database here: http://www.unhchr.ch/tbs/doc.nsf or more accessibly at http://www.bayefsky.com

The Committee provides comments on its interpretation of the human rights provisions of the ICCPR in the form of General Comments on thematic issues, State reporting obligations, or on particular rights such as the right to a fair trial. A complete list of the Committee’s General Comments can be found here: here: http://www1.umn.edu/humanrts/gencomm/hrcomms.htm

The Committee considers and makes decisions on communications from individuals who complain that their rights have been violated. The ability to make individual applications to the Committee is derived from Article 2 of the First Optional Protocol to the ICCPR. Note that a country must a party to both the Covenant and the Optional Protocol before a complaint about the State’s treatment of an individual can be made. Article 2 requires that the individuals have exhausted all available domestic remedies before submitting a communication to the Committee. The decisions of the Committee in relation to these communications are not legally binding in the same way as a judicial decision, on the State against whom the complaint is made, but they offer an authoritative view on international human rights law.

The ACT Human Rights Commission acknowledges Aboriginal and Torres Strait Islander peoples as First Australians and recognise their culture, history, diversity and their deep connection to the land.